Hope for Depression Through Mindfulness

Depression is the most disabling condition in the developed world. It causes more disability than other common illnesses such as coronary heart disease or cancer. This is due to several factors: it typically starts at an early age, its episodes are long lasting, and they tend to recur over the lifespan. Depression produces symptoms such as sad mood, loss of energy and enjoyment in life, weight and sleep changes and in some instances thoughts about death or suicide. Yet the most common form of treatment, antidepressant medications, is often only partially effective.

The Sequenced Treatment of Antidepressant Resistant Depression (STAR*D) study showed that after 12 weeks of full antidepressant treatment, only one-third of patients had fully recovered. Perhaps even more sobering, after 4 antidepressant trials over the course of a year only 45% were in recovery because some who had recovered relapsed during the year.

Although antidepressants can be helpful and even lifesaving at times, there is a need for additional treatments to help both treat depressive episodes and to prevent them from recurring. There are numerous psychotherapeutic interventions that may be helpful. These include a range of treatment such as cognitive behavior therapy, interpersonal therapy, behavioral activation therapy and mindfulness-based cognitive therapy (MBCT). MBCT differs in several important respects from the other types of therapy.

MBCT is built around a core component of mindfulness meditation in contrast to the other modalities. Mindfulness is focused on noticing what is happening in the present moment and letting go of focusing on the past or future. Mindfulness can be thought of as taking place in a discrete period of meditation or also in an attitude you bring to daily events, a dispositional approach to the world. In depression, you may notice tendency to focus on the past, often ruminating about past failures or deficits. With anxiety, a common co-occurring condition with depression, you may notice a focus on catastrophes that are looming in the future. Mindfulness with its focus on the present is naturally antidepressant as it lets go of thoughts about past ruminations and future catastrophes.

In addition to its core focus on mindfulness, MBCT differs from other modalities by its focus on acceptance of depression. This means that rather than trying to resist it or distract yourself, you acknowledge it. This does not mean resignation. Acceptance means becoming aware of it so that you can respond skillfully to it. As an analogy, an alcoholic can never get help for themselves until they accept they are an alcoholic; once they do, the possibility for change arises.

MBCT focuses on changing your attitude about depression. Most people who suffer from depression have a great deal of self-criticism; “I’m a weak person”, “I’m a defective person”, “and “I’ll never be healthy again” and other self-critical comments. When a relapse occurs the self-criticism typically rises to operatic levels! But with MBCT the approach is to be more similar to other medical problems. For example would a diabetic who has an exacerbation, say I’m a weak person? Mindfulness helps you understand your depressive thoughts are just that thoughts—not facts that have to be believed.

This highlights MBCT’s metacognitive stance—it helps you understand the way you are thinking. An important component of mindfulness meditation involves accepting whatever is present in the current moment without judgment or criticism. Think about that for a moment. For example, you can notice that you are feeling depressed but don’t have to judge yourself to be a weak person because of that.

These features of MBCT differ from some of the other approaches. For example, with traditional cognitive behavioral therapy, once you identify a negative thought, you would typically try to replace it with an alternative or more balanced thought. This can be difficult if you have been depressed for some time because you are so locked into a depressive viewpoint. With a mindfulness approach, you would notice the negative thought and instead of replacing the thought, learn to let go of the thought. For example if you were meditating on your breath moving in and out, and you became distracted by a thought of what’s for dinner, you could learn to relinquish the thought about dinner and bring your attention back to the breath. The same applies for depressive thoughts. For example, “Ah, there’s a depressive thought, but I don’t have to follow it out, I can bring my attention back to my breath”.

In some ways mindfulness allows you to have some distance from your thoughts and feelings as you observe them. As an analogy, you could think of yourself walking down a street looking in to storefront windows filled with depressive thoughts and feelings. With mindfulness you can observe these without having to go into the stores; you can keep walking down the street.

The book, When Antidepressants Aren’t Enough: Harnessing the Power of Mindfulness to Alleviate Depression, offers the reader step by step techniques for developing your mindfulness skills and using them to shift your response to depression. Instead of becoming more depressed about being depressed, you can learn a new way of coping with one of human’s greatest cause of suffering. Its approach is based on evidence-based techniques that were proven effective in a National Institute of Health study. You can shift from depression’s self-critical stance to a self-compassionate one and in the process experience much less suffering. Our research has shown reduced depression, anxiety, and rumination and increased self-compassion with this approach.

Because depression tends to produce a sense of helplessness and hopelessness, improvement may not seem likely. But these thoughts and feelings are symptoms of depression—not facts. Our research shows that the majority of people experience beneficial effects. In fact, the people with the most improvement had the highest depression scores to begin with! You can too. If you can shift to an experimental attitude and give the techniques a try, you can see for yourself. More information can be found at www.stuarteisendrath.com.

By joining this mailing list you will receive the latest news and updates related to my book When Antidepressants Aren't Enough.

Thank you for subscribing!

Your privacy is important to me! Please be assured that I will not sell or share your information. 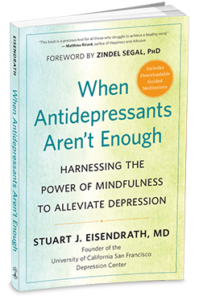